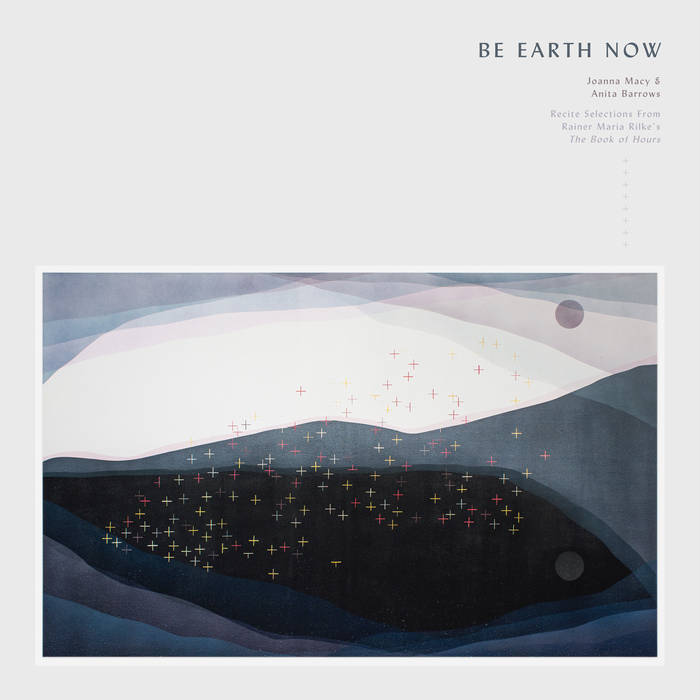 'Be Earth Now' comprises forty minutes of potent poetic recitation by Joanna Macy and Anita Barrows from their seminal translation of Rainer Maria Rilke’s 'The Book of Hours'. Channeled in a spiritual fervor in 1899, 'The Books of Hours' remains a profound and highly prescient body of work. Rilke’s poems illuminate paths of embodied mysticism, passionately express ecological grief, and reveal the exquisite expanses of the human heart.

'The Book of Hours', and now 'Be Earth Now', offer a poetic map for navigating the heartbreak, rage, and soaring love that so many of us feel in these ecologically urgent and socially emergent times. Rilke’s poems surge with passion and pain for a world that was already teetering toward peril at the turn of the last century, due to the rapid industrialization of Europe, and humankind’s increasing alienation from nature.

This work flowed through Rilke in a torrent, with sometimes as many as five or six poems arriving in a single day, each self-complete and with no need for later revision. While truly mystical poetry, Rilke’s musings on spirituality overtly critique fundamentalism and organized religion. Instead, Rilke extolls what he finds sacred in the mundane and conjures a sense of wonder for both the more-than-human-world and simply for existence itself.

So, who better to give voice to these mystic treasures than Joanna Macy and Anita Barrows? Not only because of their enchanted translations, but also because these women are unquestionably two of our righteous elders. Macy and Barrows have worked diligently for many decades, through art, activism, education, psychology, and spiritual practice, to bring some balance back to this world. The same world that Rilke pleaded with his God to sustain for “just a few more hours,” so that we might have time to mend our relationship with the natural world, to cherish and connect with what is good and real, and to possibly even learn to “be earth now.”

MORE ABOUT THE ARTISTS

Rainer Maria Rile – Poet
Rilke was a Bohemian-Austrian poet and novelist born in 1875.

If you like Be Earth Now: Joanna Macy & Anita Barrows Recite Selections from Rainer Maria Rilke's 'The Book of Hours', you may also like: